With “Star Wars: The Force Awakens’ fast approaching the hype machine is at full speed. Thinking about all things Star Wars got our imaginations turning. The characters, cool weapons and space ships but did you ever wonder where the Star Wars movies were filmed? (Spoiler alert…they’re not real. I know right? Major disappointment).

The igloo exterior of Luke’s house was filmed about 300 kilometers away on the dried-up salt lake of Chott El Jerid.

The surrounding craters are man-made, to create the illusion that the underground house is next to it.

The igloo from the 1977 movie was dismantled, but again rebuilt for “Attack of the Clones,” and later restored by a fan.

Nearby is La Grande Dune, site of the Dune Sea.

About 30 minutes from the igloo is the set of Mos Espa, the spaceport town where Anakin was discovered as a young slave.

Matmana, Tunisia. Possibly the most recognizable location, this serves as the Tatooine compound where we first meet Luke Skywalker, who does not want to participate in harvest because he wants to pick up power converters. And is it just me or do we get a sense that even by Episode VI he’s still disappointed he never got them? But I digress.

The Tatooine dwellings from these introductory scenes are actually not entirely made up. They were pre-existing, and inspired by their shape, size, and overall look, George Lucas changed very little about these traditional desert homes for filming. The mise-en-scene is filled with fantasy and sci fi elements to complete the illusion, but the main structures come from real life. Perhaps another reason these films hit such a chord. You can even stay overnight in Aunt Beru’s living room at the Hotel Sidi Driss!

What better place to film another planet than Death Valley, California? Many scenes were filmed here, perhaps most notabely the road along which everyone’s favorite Droid duo walk ominously towards Jabba the Hutt’s palace. Due to it’s other-worldly landscape, Death Valley is also used extensively for Tatooine exteriors.

Hiking through Jedediah State Park in northern California, it’s impossible not to think an Ewok might peek out from behind the trees. And for good reason! Most of the Planet Endor Ewok village and battle sequence in Episode VI were filmed here.

Speaking of other worldly landscapes, the Ice Planet of Hoth, which opens Episode V was filmed on a glacier in Norway. It’s very easy to imagine snow monsters and hidden ice caves existing here!

Like any good Star Wars nerd, I don’t like giving much attention to the prequels. But there’s no denying that they were shot in some pretty spectacular locations. Like Villa del Balbianello which was used for Naboo, where actor Hayden Christensen gave an infamous speech as Anakin Sykwalker…memorable for all the wrong reasons…learning the hard way that sometimes you really should question the screenwriter.

While you’re in Italy, take a tour of the impressive Palace of Caserta which was the location for many interiors of Queen Amadala’s palace.

In Attack of the Clones, the beautiful Plaza de Espana was used as Naboo’s capital. Located in Seville, Spain, the plaza was bulit in 1929 for the Worlds Fair. The interior is used as government office space, but tourists and visitors are welcome to walk around the picturesque exterior.

Rounding out our journey is Tikal, Guatemala. Star Wars fans may know it better as Rebel Base Yavin 4 in Episode IV. Steeped in real and not just fictional history, Tikal is one of the largest cities we know of from the ancient Maya civilization. 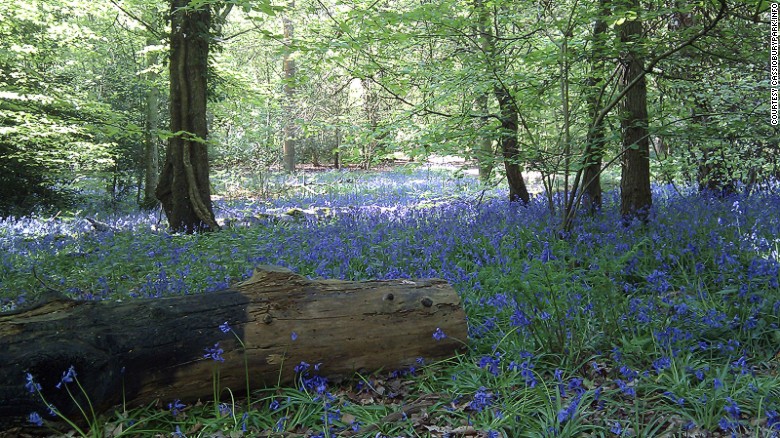 Whippendell Woods: So pretty not even Jar Jar Binks can spoil it.

The forest of Naboo, where Jar Jar Binks first meets Obi-Wan Kenobi and Qui-Gon Jinn in “The Phantom Menace,” was filmed in England near the Leavesden Film Studios.

Gungans like Jar Jar live in underwater cities, but there’s no lake in Whippendell Woods.

All the shots with water were created with digital effects.

So get out your passports and make a plan. Travel to all the Star Wars locations and declare yourself a super fan.

AGFA Adds Rare Giallo THE EMBALMER For Your Binging Pleasure

#WorldGothDay: Neil Gaiman’s THE SANDMAN is Coming to Audible